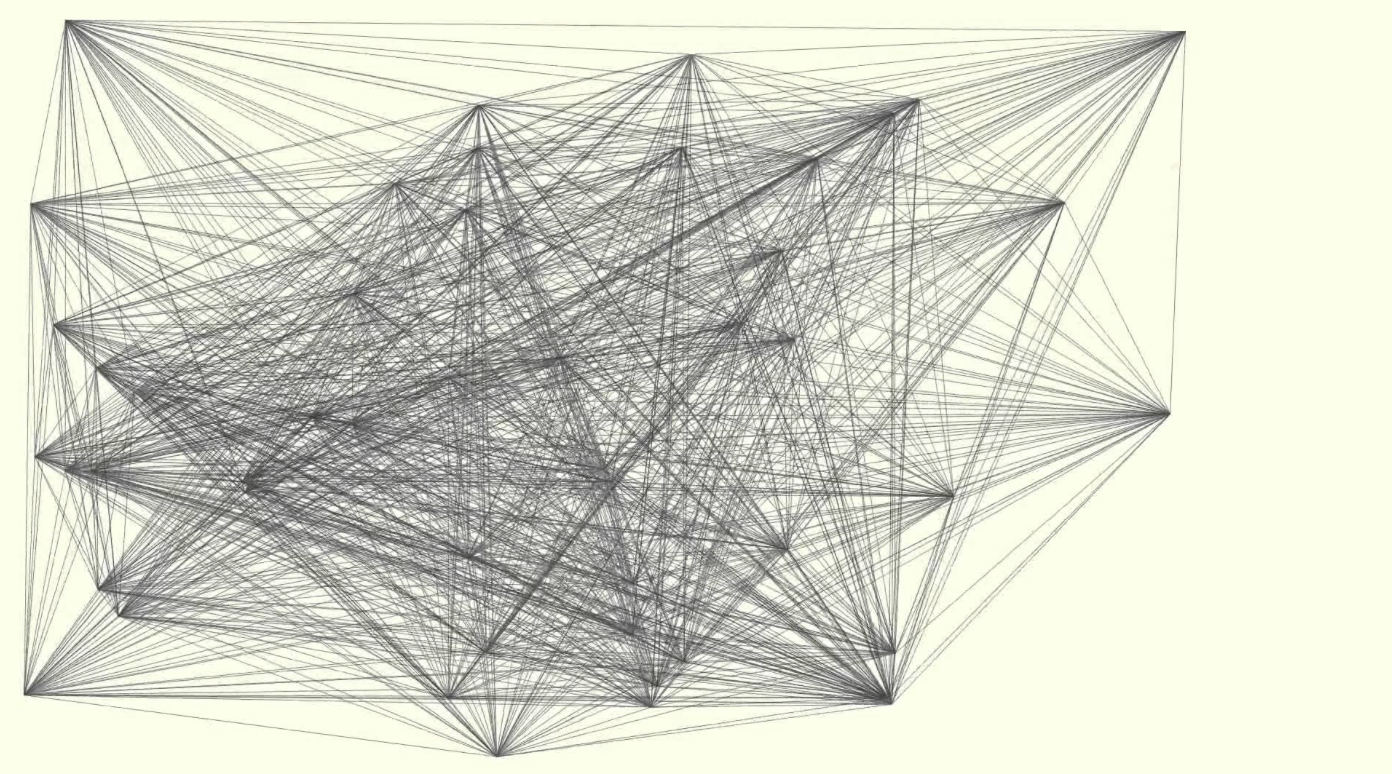 Sol LeWitt was a master of Conceptual art practice, challenging modern art from 1963. As Kent (2007, p. 68) states “His most radical contribution was to separate the idea for a work from its execution”. LeWitt’s series of ‘Wall Drawings’ are an exemplary showcase of the simplicity behind the complex nature of Conceptual Art. Specifically, ‘Wall Drawing #118’ (1971) implements a procedure to be undertaken by another. The instructions are as follows:

“On a wall surface, any

The points should be evenly

distributed over the area

of the wall. All of the

points should be connected

After reading these instructions, different people would attempt to create the artwork described by LeWitt. The description only provides the aesthetic value of the creation and each individual work will be slightly different in nature. The instructions are the artwork and the physical creation is an abstraction of this process.

LeWitt’s ‘Wall Drawing #118’ uses procedural actions in order to create an artwork. There are many details within the instructions but when broken down into smaller components, the aesthetic of the creation becomes clear. The materials are a “continuous stretch of wall” and a “hard pencil”. The first instruction is to place fifty points at random, but evenly distributed across the surface. Following this, the final instruction is to connect all of these points by straight lines. When all listed together, the procedure can sound complex but it is a series of instructions that will create the final artwork.

Throughout LeWitt’s ‘Wall Drawings’, he consistently describes the procedure using symbols, lines or points, essentially creating very geometric works. As LeWitt (2007, p. 70) points out, “A line, for instance, or a number is much more precise than a word”. However, LeWitt’s procedures are not precise, they do not include specific dimensions, nor specific coordinates. The instructions tend to be of the entire object rather than focusing on specifics (Persing 2005, p. 147). A defining factor of LeWitt’s work is repetitiveness. As in ‘Wall Drawing #118’, line upon line is drawn connecting each point. This is a repetitive procedure that slowly forms a greater work. Carlin (1982, p. 63) describes LeWitt’s creative process as “rigorously ordered repetitive series to unpredictable visual results”. Unpredictable results can sometimes lose the aesthetic value that the abstraction is supposed to hold. LeWitt’s instructions are interpreted by different individuals and as such their idea of the final product may be skewed, or their reading of the procedure different to what LeWitt had imagined. Personal attempts at ‘Wall Drawing #118’ demonstrated this difficulty in precisely following the instructions given. This raises the question of  whether it would improve the artwork if LeWitt’s instructions were more descriptive and exact? Would this then be defeating the purpose behind the artwork? The art is in the concept and its aesthetic value, interpretation allows for individuality in what would seem to be a precise piece.

LeWitt’s concept challenges what it means to be an artist and what constitutes as art. His Conceptual creations prove that the idea itself is what gives the final product meaning. LeWitt was often not even present for the execution of his works, tending to hand it on to students or other practitioners. “It’s as though I were writing a piece of music and somebody else is going to play it on the piano” (LeWitt 2007, p. 69). A composer creates a piece to be performed by others and LeWitt creates art in much the same way. The artwork is separated into two parts, the concept and the execution. This is the essence of Conceptual Art and LeWitt’s ‘Wall Drawings’ are an example of a concept forming into a physical piece. Like a cooking recipe, the instructions allow for the abstraction, or food, to be made. The product is not as important as the procedure, because without the initial idea followed by the instructions, a final piece cannot be created. A “meaningless visual structure married to an implicitly complex conceptual apparatus” (Carlin 1982, p. 62). This analogue description of procedural action is inherent in modern day coding. ‘Wall Drawing #118’ by Sol LeWitt is exemplary of Conceptual Art and abstraction through instruction.  The initial idea leads to a procedure, the key element in the artwork. The final physical creation is ultimately interpretable and entirely individual. The aesthetic value of the piece, as described in the instructions remains throughout, however it is the concept, the instructions which is the artwork.